With the editor finally released, I’ve spent nearly all my time thus far setting up the amended Austrian league structure which will provide the framework for my club and country save this year.

But there’s quite a bit more that goes into that initial set-up of the game. And I’m not talking about what you do in the actual game environment, this was covered by Petr Uchio last year. I mean streamlining the default game to get rid of those annoying little things that SI sneak in every year, personalising the game and making it just a little prettier.

So here, in case you fancy doing something similar, is how I’ve set up for what I hope will be an epic game

One of the very first things I do when a new game arrives is port over my graphics packs from the last version, or this year from the FM13 folder. The graphics are always compatible and only need updating for any amendments that have been made in the intervening period. Luckily, I’ve chosen packs which are updated regularly by the host websites so the effort is minimal. But the effect is pleasing:

You can see a few of my graphic packs  here.

First up is the Sortitoutsi cut-out facepack. I prefer this one as it blends in nicely with the background of the skin and has the added bonus of being in the same format as the newgen faces when they are created. You can find it here:.

You can also see the logos from this megapack from the good people at The Away Stand.

I went for this one partly because they look nice but also because it was the most comprehensive megapack I could find that included the Austrian lower leagues.

You can also see my background pack and kit pack in that screenshot but I can’t for the life of me remember where I got either. If anyone recognises them, let me know and I’ll credit the author.

I do know where one set of kits came from as I tend to make new kits for Rapid each year using a handy bit of software called Smart Shirt Designer 2. This year, you will be seeing these to start with:

The next absolutely essential add-on is the Sortitoutsi “Real Names and German National Team Fix“.

For marketing reasons, each year a number of national teams will never be populated with “real” players and a number of clubs will be renamed to something not subject to copyright – e.g. FC Porto becomes FCP. And each year, Susi deliver this file which sorts it all out for you.

On top of that, it gives each competition its proper sponsored name. Note though – this year you have to install this BEFORE starting your save to get the full effect. Otherwise certain German clubs (Schalke / Gelsenkirchen) will remain misnamed.

You won’t be able to see its impact yet but I’ve also downloaded and installed the OLT Expanded Hair Pack which make your newgen styles a little more varied and interesting than the default selection. You can find it here.

Next, I got rid of the “Be A Newgen” file which creates newgens each year named after people who attended the FM Documentary screenings. No big deal but I find it irritating and not being able to remove faceinthegame for the last 10 years, damn straight I was getting rid of this. To do so, delete this file at this location:

Next, I had a wander around the in-game preferences to tailor the game to my own particular… well… preferences.

First up, the interface:

I don’t like the bouncy kinetic scrolling so that went. I also don’t like landing on the profile pages when I click on a competition, surely the table is the thing you are most interested in?! These are all personal opinion so it’s up to you how you tailor it but it’s nice to have the option.

The option in the bottom right – to remove the “highlighted” links in news messages – gets rid of those annoying dotted lines under clickable name. Was delighted to see that.

Screenflow is actually a really handy little addition that not many people use. First of all, the option at the top means you never have to see the disgusting “news” page again but the customisable options below allow you to have particular screens delivered to you on a regular basis.

The one I’ve added there is to have the players’ stats page of the second tier pop up once a month. It’s something I’d forget to do too often so it’s handy to have it delivered in an unobtrusive manner and alert you to anyone doing particularly well in a league you aren’t playing in.

Next, I’ll set up the custom views on the squad screens but you’ll have seen enough of these over the blog posts, and will likely see many more, so I’ll move on.

Now we come to the bulk of my work – with the editor. You can download the editor through Steam by going to your Library, clicking on the Games dropdown and selecting “Tools”. The editor will be there to download.

My edit involved a number of things. Firstly, I fixed a series of bugs in the default Austrian database:

The most time-consuming, though, was creating the new league structure:

The Bundesliga was extended to 16 teams playing a 30-game season; with 2-up/2-down to the Erste Liga which became a 12-team league with an SPL style split after 33 games. 2 go down from the Erste to the activated Regionalliga (Mitte, Ost and West) with promotion achieved through a playoff system.

Similarly the activated Landesligen (all 9 of them) has a playoff system to earn promotion to the 3 available slots in the Regionalliga. The Austrian Cup is introduced more or less as-is.

If you want to try it for yourself, you can download the file here.

And after all that, well we’re ready to go. I decided to go with the set-up shown below this year – keeping the big leagues active should give the better Austrian players “real” games and development whilst providing proper competition in Europe.

So the top two tiers in England, France, Germany and Italy – where Austrian players are likely to find some games; and the top tier in Holland and Spain.

My “advanced” database consists of the standard “large” database with all Austrian players added (for Club and Country purposes) and all European and South American players of “national” reputation and above – for the sake of ensuring “proper” players throughout continental and international competition.

And the last oddity that I had to decide on before even clicking through the mind-numbingly dull “meeting with the chairman” was one of the new additions to FM15 – the “type” of manager I wanted to be. I went with this: 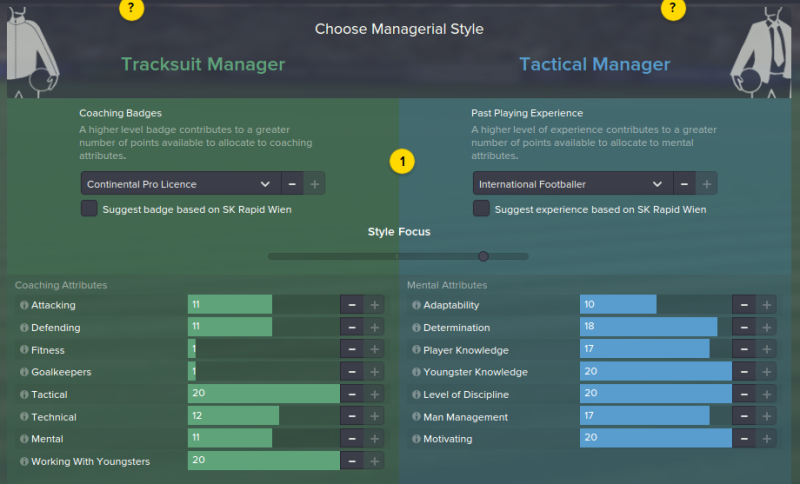 Being a “Club and Country” save, I’ve gone with the former international footballer option which may give me something of a headstart. I really have no idea what the long term impacts of this selection are going to be, but I went with a primarily “tactical manager” selection and maxed out youngster knowledge, level of discipline and motivating.

The first is obvious given my desire to develop the youth for the national team but the latter two are simply because I can’t be arsed with all the squad morale bull that has been written in this year. It seems way overdone to me so hopefully high values here will help balance it out a bit.

And with that, I finally got round to actually delving into my save! For those who don’t know, these are my plans for this year although I was going to try and create this tactical idea. Of course SI had other ideas.

Because when they said that there were “four new roles including the inverted wingback”, what they really meant to say was “we’ll have four new roles… maybe… if we get round to it. If the other stuff works. Otherwise we’ll be busy fixing that and we’ll just ignore the fact that we’re advertising a game with new features that we are fully aware don’t work. By the way, fancy buying our game? It has loads of new features.”

Of course some will tell you that “there are priorities to work on” or that “SI are working hard to fix it”. But that’s a nonsense excuse to me. If I bought a car that advertised an iPod dock as a new feature, I wouldn’t put up with it simply not working because they were “busy fixing my wheels instead”. I’d wonder what took them so long to fix the sodding wheels to start with.

So yeah, I’m pissed off. But once I get over that, I’ll have to abandon the previous tactical ideas and I’m currently working on these kind of ideas. I say ideas, they are all depressingly simple:

I’m only a week or so in to the save so I’ll save details on how the first few months have gone until another time.

Until then, if you have any graphics recommendations, or recognise where I got those backgrounds and kit pack from, please let me know in the comments below.

An addict's ramblings on Football Manager

Other blogs worth following:

The trials and tribulations of being an average Football Manager

From London to Linz.

I watch every minute of every Austrian Bundesliga game. This blog contains posts from the top players of the week, to top youngsters to watch. Follow me on twitter for more: @FRfussballtim. For all enquiries email: tim.jones@footballradar.com. All views expressed on this blog are my own.

Dare to think outside the box

Discussing the intricacies of Football Manager

The ideas of a football manager addict!

A blog taking a closer look at tactics within Football Manager.