Ok, a quick poll if you would all be so kind:

I have recently discovered that, as I entered the top 10 Austrian clubs into the existing German football structure, Rapid Wien and the other migrated teams assume the ‘newgen production attribute’ of the host nation – i.e. Germany. As you can imagine, this has lead to a massively unrealistic level of newgen production in the first two seasons – as evidenced by my own superb intakes.

This has put me on a right downer and I am asking your opinions. Should I continue or not?

I simply cannot be bothered playing in the default Austrian system and I’m not really keen on starting again so if I do decide to quit this game, I will need to start a completely new one.

With that in mind, your opinion would be appreciated.

An update – I have decided to agree with the 70% plus of people who have voted for the Rapid / Austria game to come to an end. Unfortunately, I just find this far too unrealistic. The challenge, for me, is to develop a small national side into a great national side despite the restrictions in place. This inadvertent edit just removes that challenge completely and makes the game null and void for me.

I have already decided on a new game, in fact I’ve started it already. Watch this space for a new article soon… 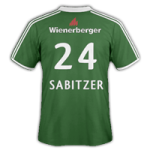 Finally! The patch arrived and I have been able to play Football Manager 2014 for real! In fact, I was so excited about being able to play FM14 in anger that I’ve sped through the first season before I even had a change to set the scene.

Therefore, this post is going to have to cover a lot of ground – setting the scene in how the game has been set up, my general approach to the game and a look back at a successful first season.

As many of you will be aware, I have an FM-induced affiliation with both Rapid Wien and Austria – built up over years of playing them within the game and then graduating into watching the teams week-in-week-out. This year’s version returns to an edit that has proven to be the most interesting and long-lasting in the past – an Anschluss merger of the Austrian and German football systems.

However, as opposed to previous years, this version’s updates will place much more focus on the national team. Although I will update on the fortunes of Rapid, this will hopefully just provide a background of tactical experimentation and player development with fuller, more detailed analysis provided on the Austrian national team’s progress.

This will take the form of the odd piece on individual players whom I hope will develop into the national team and thorough reports on specific matches – why I used certain tactics, why I made certain in-match changes, etc.

Hopefully, that sounds like something of interest to you. If so, read on…

END_OF_DOCUMENT_TOKEN_TO_BE_REPLACED

An addict's ramblings on Football Manager

Other blogs worth following:

The trials and tribulations of being an average Football Manager

I watch every minute of every Austrian Bundesliga game. This blog contains posts from the top players of the week, to top youngsters to watch. Follow me on twitter for more: @FRfussballtim. For all enquiries email: tim.jones@footballradar.com. All views expressed on this blog are my own.

Dare to think outside the box

Discussing the intricacies of Football Manager

The ideas of a football manager addict!

A blog taking a closer look at tactics within Football Manager.